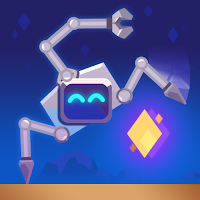 Welcome to a new hit from C.A.T.S.: Crash Arena Turbo Stars and Cut the Rope creators — Robotics! Build your own battle robot from various spare parts, then program it to walk and fight. Watch it clash with real players from all over the world in hilarious physics-based battles. Unlock new details, arenas, and more!

KEY FEATURES:
– Hilarious robot teaching mechanic: by dragging parts of the robot in different directions, players create complex movements that the robot repeats.
– Physics-based fights: the way your battle robot collides with other battle robots and the environment results in crazy, surprising, and funny moments.
– PvP battles against real players: there are thousands of battle robot trainers like yourself all over the world. Prove that you’re the best!
– Variety of battle robots and parts: bodies, arms, legs, and weapons for your battle robot allow for infinite combinations and tactics.
– Competitions and special prizes: climb on top of the leaderboard and get amazing rewards that cannot be obtained anywhere else.
– Black Belt Masters: progress through the game to unlock new fighting belts for your battle robots. Only the strongest ones will be acknowledged as Black Belt Masters!