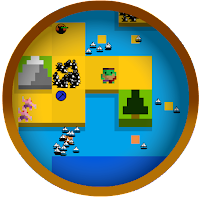 RAWAR2 is a simple offline strategy game(RTS). Well, simple… You’ll soon find yourself fighting complex real-time battles and hopefully leading your clans to heroic sieges. Fight enormous wars in the age of knights and castles using soldiers, ships, and… fantasy monsters. Command, conquer and defeat the mightiest of AI-controlled enemies you’ll ever find on your device!

– Simple gameplay learned within a minute.
– Explore maps full of rivers, woods, seas, and mountain ranges
– Dig for gold, chop wood, plant crops, scout for mana.
– Build giant empires on enormous maps
– Clash with mighty enemies like Dame Sarre, Gromgrund Stareye and Bardolph the Clumsy
– Summon monsters like the Ogre, the Boulder Giant, and the Small Colossus.
– Upgrade your castles, shipyards and other buildings.
– Risk soldiers’ lives to capture resources.
– Send thousands of troops with a flick of the finger and strive for global domination
– Find the best tactic for building, wall placement and mining.

This game is ad-free!

RAWAR2 is a special implementation of the RTS-genre because its minimalistic design allows for the command of thousands of troops on giant maps without losing strategic oversight. It has been said that if RAWAR2 is like war, other strategy games are a knife fight in a closet.

No wifi needed, this game works without the internet. The internet-permission is only used for purchases of additional maps, map-voting, and promo code verification.

RAWAR2 is a continuation of the first RAWAR with a whole range of improvements:

MOD:
Clicking on the dev mode button in the lower right increases the rank and experience that can be spent on various improvements.