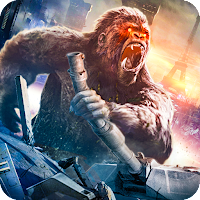 Rampage through the streets and smash the city to pieces with epic monsters in the #1 3D destruction simulator game!

Take control of epic monsters and evolve them into an unstoppable army. Punch down buildings, smack down skyscrapers, crush houses to bits and smash everything that stands in your way! Escape the police, the SWAT, the military jeeps, and the tanks! Show no mercy!

MOD:
Purchased all the monsters and disabling ads;
Much money.