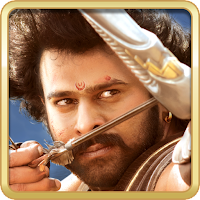 Mahishmati needs your help, Senapati!
Train your army, build your defenses, and join forces with BAAHUBALI, KATTAPPA, BHALLALADEVA, DEVASENA, and the other heroes from Bahubali and Bahubali 2 movie to push back the ruthless Kalakeya. Using your army and the special powers of Heroes, wage war against the Kalakeyas, defeat them in challenging battles, and bring glory to Mahishmati. Play with friends, make clans, and enter into PvP battles with other players from around the world.

FEATURES:
– Build an undefeatable fort to help Mahishmati become a mighty empire
– Build archer towers and spear towers to defend your fort
– Ambush invaders with the dangerous spike traps and snake traps
– Destroy your enemy’s army with superior weapons like the arrow machine
– Research and train your troops using the barracks, the armory and the war library
– 10 UNIQUE TROOPS from the movie are available for battle
– Smash enemy forts and rajyas using powerful war elephants and long-range catapults
– Plunder and capture the enemy’s resources with the help of thieves
– Priests heal your army with the blessings of the Gods of Mahishmati
– Unlock powerful Heroes with glorious powers! Baahubali’s Lion Punch, Kattappa’s Summon Guards and Bhallaladeva’s Chain Mace will strike terror in the hearts of the enemies of Mahishmati!
– Win battles using special Spells and Rally
– Fight Solo Missions against the cruel Kalakeyas
– Battle other Players to become the most powerful Senapati in Mahishmati!
– Make clans with your friends and wage war against other powerful clans for the glory of Mahishmati

This MOD is useful in making you not lose the trophies in PVP, you have to activate freeze everything before spawning troops and command them to hit enemy HQ directly then once they reach there to turn off MOD and don’t turn it back on or else it will crash but that’s okay because when you restart immediately the battle will continue as normal. Watch VIDEO below to understand how to use this MOD effectively