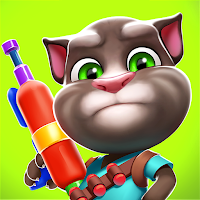 Join the BEST WATER WAR in your life! Pack your water balloon. Get your water gun. Prepare for a mission and make your opponents soaked! Plan sneaky attacks and collect Coins and Energy from other teams. Use them to build an unbeatable CAMP! And raise your tent as fast as possible to get a weapon of cold water before your enemy!

★ WAKE UP YOUR CAMP
Build a camp that is second to none. Hurry up and set it before the other team sees you. Prepare Your Troops, Hero's Hall, Tower, Coin Factory, Energy Generation, and more. Upgrade your Minivan and buildings in your Camp to get the best weapons and the most Energy to defeat other teams.

★ ATTACK & PLAN ATTACK
Prepare defenses like Sprinkler, Tower, Puddle, Catapult, Cannon, and more. Protect Your Troops, Your Camp, and Your Coins as you plan unique water fight strategies! Build your troops and lead them to glory! Make the invaders run!

★ WIN A WAR OF WATER!
Take a Water Gun, Slingshooter, Wingsuit and other weapons. Use the right tactics and go straight to the action! Test your skills and train yourself to perfection in the SINGLE PLAYER Campaign episode. Attack your enemies and fight in online MULTIPLAYER mega battles. Progress through levels and join your forces with other players. That way you can play in even bigger battles! This serious fight is very fun!

★ COLLECT GOLD & ENERGY
Win the most exciting water battle in summer and level up! Collect Coins and Energy from other online players and use them to increase your camp. Get your enemy resources before they get yours or ... Sneak behind enemy lines and steal them!