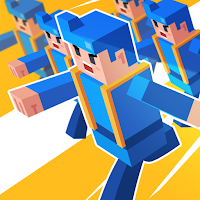 Take that city! Mod Apk Once upon a time, this was the city we depend on, but now ... Armed thugs are rampant and giant monsters are hidden. There is danger everywhere, and fighting always happens. Now we need your leadership. Get citizens to arm themselves, take weapons in hand, launch battles and take the city!

- Things you have to do are not complicated, kill monsters to get prizes, then upgrade your equipment, Arm yourself stronger!
- Don't worry, you won't fight alone, use your food to gather more people, and have a strong team. In this environment, food means life!
- If you are unlucky to meet a cruel King Kong, or a chainsaw madman with a mask, don't be afraid, defeat them, and take the city further! After all, it was nothing more than a terrible giant spider ...
- You cannot occupy an entire city at once. You need several strategies, one at a time, one step at a time, and a plan.
- If you have taken the city with difficulty, don't get too excited too early. The coastal city is still in full swing, the city of ice is still running rampant, and the situation in the desert city is even more terrible, they are waiting for your rescue!

Take that city! Featured:
-Create monsters and seize supplies and buildings!
-Convene citizens, work together and fight together!
-Update your equipment with materials to increase the combat effectiveness of your team!
-Construct buildings and build battle bases!
-Call the mighty and attacking giant!
Randomly generated BOSS brings you more challenges and rewards!
-Easy to understand, one-handed operation!

Mod:
When using enough gold coins to upgrade
The gold coins will not decrease but increase