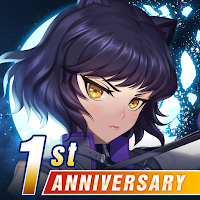 Presented by Hangame and Rooster Teeth Animation, RWBY: Amity Arena turns your mobile device into a Scroll connected to the Cross Continental Transmit System, so you can play with friends all over the world! Inspired by Remnant: The Board Game, RWBY: Amity Arena made Remnant hit by a storm as the first Scroll game of its kind. The influence of Remnant's favorite board game can be seen with the Grimm mix player, Atlesian Technology, but with the added touch of Hunters and Hunters who come and have made the list for the next Vytal Festival.

CHOOSE YOUR HUNMEN
Choose Hunter or Hunter from Vale, Mistral, Atlas, or Vacuum! Each with unique abilities filled with dust, resemblance, and weapons, and pit your team against your fellow Academy members in friendly matches before facing opponents in real-time to climb the ranking ladder!

FIGHT IN TOURNAMENT
Compete against academies and other teams to move to the top of the leaderboards! With your favorite units and characters, prove your greatness on the global stage. Coherent and coherent Creatures of Grimm, famous Huntsmen, White Fang members, or Atlesia military to complete your team!

WORLD EXPERIENCE Time
From the frozen top of Atlas to the lawn in front of Beacon Academy, battle your team against other players around the world ... all over the world! Open a new arena and location on Remnant, build a solid pile of characters, and create your own brilliant strategy!

ADJUST YOUR DECK
Collect dozens of your favorite character cards from the RWBY universe. Use their similarities and skills to fight opponents, knock down their units, and destroy their structures. Learn from the Academy's friends and colleagues, the best tactics, strategy, time skills, and high-level games to win each game!

COMPETITION TO OTHER PLAYERS
Real-time strategic duel means that you are face to face with other human opponents. Use your wits and skills to defeat your opponents and destroy their buildings before they destroy you! Discover the capabilities and utilities of each card, and use it to flip the tables at the last second!