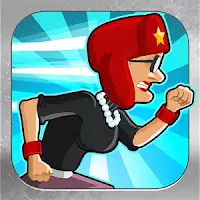 Our grandmother was locked up in Angry Asylum by Fred the white agent, he planned his escape, and he needed YOU to guide him through the streets once he was caught!

Run, jump, run and swipe up and around tons of different obstacles and WACKY in this crazy new endless running game!

THE PUNKS BACK! Bash them out and grab their coins to clear the streets once and for all!