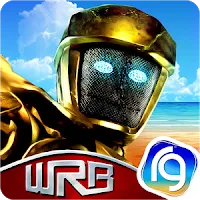 REAL-TIME BRAWL WITH FRIENDS
Unleash your true self in live local Wi-Fi & Bluetooth multiplayer and earn bragging rights while enjoying the winning moment!

UPGRADE & YOUR CHAMPION'S COLOR
Fight and upgrade your robot to become stronger, faster and crueler. Color your robot, express yourself and have fun in the Paint store!

SHOW OFF YOUR WINNINGS
Win challenges and showcase your achievements in the new Trophy room.

ACHIEVING GLORY IN THE ARENA
Reign supreme in 11 big arenas that can hardly contain this machine means a giant.