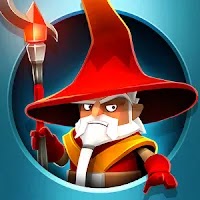 The dreaded Queen has awakened and with her, a foul creature located under the peaceful land of FellCrest. But all is not lost! The forgotten heroes of this land who have long put up their swords and bows are back and ready to fight in pursuit of honor and justice!

These brave elves, wizards, and fighters must find their ancient weapons, relearn old battle spells, and come together to defeat the evil forces of Queen Amethyst.

The adventure awaits... Are you ready?

* Recruit and train a legendary army of heroes to take victory!
* Unlock and upgrade unique special moves for each Hero
* Multiple battle modes, including Player vs Player challenges and Survival mode
* Collect, Level up and evolve powerful cards on your way to build the perfect BattleHand
* Adventure through mystical lands, discover new locations and defeat the Unblemish creatures!
* Perfect your combat strategy using Elemental powers and weaknesses for all heroes and villains
* Complete epic quests for smelly cheese and Stardust!
* Stunning 3D animations and easy to learn tactical combat