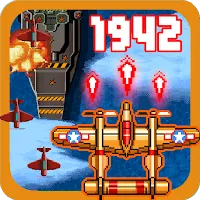 1942 Arcade Shooting Mod Apk This is World War II, the story takes place in 1942 and you take on the role of  "Super Ace ", a brave fighter pilot. There are 20 levels to go through and the aim is to reach Tokyo and destroy the entire Japanese air fleet. And before you reach the main city, you'll travel through Midway, Marshall, Attu, Rabaul, Leyte, Saipan, Iwo Jima, and Okinawa. Each level you start and end on an aircraft carrier. Then on your plane, you fly to fight against enemies in the sea and land and shoot them all. You get some different Power-ups to increase your firepower and chances of survival after destroying certain aircraft formations. There are Power-ups like two machine guns, two side planes, extra loops and so on.
This is one of the classic game series 1942, 1943, 1944, 1945