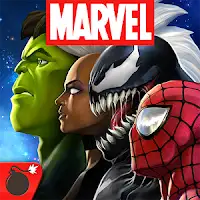 UP TO FRIENDS:
• Collaborate with friends and other Summoners to build the strongest alliance
• Strategize with your alliances, help them keep the Champions in the fight
• The battle to the top in the Alliance event and take the Alliance Quest series together on a specially designed search map to earn exclusive Alliance Rewards
• Test your Alliance's courage by battling with alliances from around the world in Alliance Wars!

COLLECT THE STRONGEST SUPER HEROES (AND VILLAINS!):
• Collect, level up, and manage your team of heroes and criminals wisely to receive synergy bonuses based on affiliates and team relationships taken from the Marvel Comics page
• Pair up Black Panther and Storm or Cyclops and Wolverine for bonuses, or create a Guardian team from the Galaxy for the affiliate bonus team
• The stronger the Champion, the better their stats, abilities and special moves will
• New Champions are added to The Contest all the time!

QUEST AND BATTLE:
• Journey through an exciting storyline in Marvel Classic story mode
• Fight it out with a huge array of heroes and villains in iconic locations that include Marvel Universe such as the Avengers Tower, Oscorp, The Kyln, Wakanda, The Savage Land, Asgard, the S.H.I.E.L.D. Helicarrier, and many more!
• Explore dynamic search maps and engage in a healthy dose of action-packed combat utilizing controls developed specifically for Mobile platforms