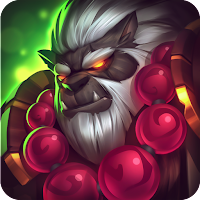 Join the fast-paced turn-based tactical card game and summon Mighty heroes on the battlefield with unique magic to crush your rivals on online collectible card games where the deck is the key to winning War. Command your Heroes and use strategy!

Before making your decks, choose from a selection of 3 mighty commanders who each have their own and legendary heroes/magic.
-Animal War, the majesty of the forest, he controls animals and trees.
-Royale Knight, Might and Mighty, he commands the most heroic knight
-Rogue goddess, Evil herself, she led the beast of the most chaos.

Over 60 heroes are available for you to create a variety of tactical play and find your own deck with a collection of heroes, animals, towers, skills, and buildings, build a sage of your card collection before joining the arena.

In real-time, turn-based PVP battles, challenge your friends or play against rival players and destroy them with a bunch of your collectible heroes.

Use strategy to crush your rivals on legendary battles under 3 minutes and ride your league.

Start campaign mode to discover the world of Heroes of Magic and unlock new collectibles cards.

MOD:
One Hit
God Mode
Not work for the main hero
Sometimes linked with the enemy/not work