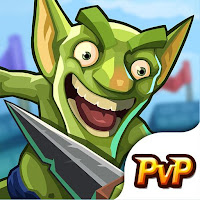 Story: Heroes of the Empire: War clash
Under the fog, your kingdom and others are growing from day to day. But...
Magic Gate has been opened. Orcs, goblins, Dragons, Wizards,... Appear. The kingdom gathers them to gain more power. The more strength, the more threats to the world.
The war began between kingdoms. Only the strongest can stop this war. The world needs heroes-who can defeat other kingdoms and regain peace.

Lead your army to battle in this fantasy RTS card fighting game to get honor for kingdoms and peace for the world.

A guide to new heroes to grow the Empire and conquer all the battles in this epic PvP game.

🔥 Collect your allies (collect more cards)
There are 2 ways to help you collect more cards:
-Open the chest: claim the chest after each wins the battle and it takes time to unlock.
-Buy in-store: You can buy a card with gold or gems.

🔥 Train Your troops (upgrade your cards)
Upgrade your cards to get more power. Enough cards and gold needs, let the level upgrade now to increase the hero stats. The more the card level, the nearer winnings.

🔥 Organize your troops (Customize your decks)
There are 3 deck battles for you. Each card has its own unique stats and roles. Consider careful when building your battle deck: Determine your strategy and combine the logical cards together.

🔥 regain peace (defeat your enemies)
Remember:
-Destroy enemy fortress to win.
-Don't forget to protect your tower.
-Use the right cards and time to fight against the enemy cards.

Hero of Empire: War Clash Features
-Real-time strategy Battle card game with other players in the world
-Customize your deck and test different battle tactics
-Unlock and upgrade cards to make you stronger
-Challenge with your friends on the personal 1v1 card fighting game
-Unique Heroes: Choose the hero you want and defeat your enemies
-Ranking System: Make people know who is the ruler of Battle Arena
-Updated frequently: We listen to your feedback and will try to improve the game better