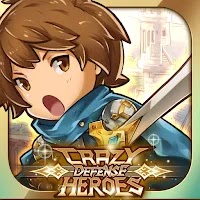 • Create your army and hordes of crime battles in glorious combinations of Tower Defense, RPG, and Collectible Card Game!

Build a power tower in preparation for a monster mob attack, master multiple spells, and deploy your champions into battle!

The world teeters on the brink of doom as evil tyrants invade weak kingdoms in their quest to steep the world in lasting darkness. But one hero has been prophesied to cleanse the nature of their wickedness: you. Crazy Defense Heroes unite the strategic deck building of Collectible card games with Tower Defense mechanics!

• COLLECTIBLE CARD MATCHES MEET TOWER DEFENSE! •
More than 90 cards to collect! Use Hero cards to deploy your champions to the battlefield, Tower cards to cover the strategic point of control, and spell Cards to blast their criminals into smithereens!

• 500 + LEVELS TO TEST YOUR COURAGE AND MIND FOR TACTICS! •
March your troops through dense jungles, cold Tundra, rolling hills, arid deserts, and more to fight fearsome hordes of minotaurs, undead, and even dragons!

• TEST YOUR SKILLS WITH DAILY AND WEEKLY CHALLENGES! •
Take on especially challenging daily attacks and weekly missions! With greater risk comes greater rewards, so sharpen your armor and ready your engineers to organize your turrets to set aside an upcoming mob.

• CONQUER BATTLEFIELDS AND LOOT THE WAR! •
No provision, war is gone! At some level, you get the chance to unlock the scavenging spot. Collect and customize resources to fill your inventory.

• 20 + UNIQUE, UPGRADEABLE HEROES READY TO BREAK SKULLS! •
Unlock unique allies to join you on your glorious crusades! You can upgrade them and turn them into powerful, amazing champions in your Beck and call!

• CUSTOMIZE YOUR MAIN AVATAR! •
Equip your main heroes with an assortment of gear — from helmets, armor, shields, boots, accessories to weapons. Your character's equipment determines its stats, such as attack power, defense, movement speed, and health regeneration.

• AN ARSENAL OF SPELLS ON YOUR ORDERS! •
Summon dragons to rain fire on your enemies, freeze your enemies on the ice block, or heal your champion with Healing magic!

• POWER TOWER! •
Build defensive towers and brace yourself for a terrible horde attack! 7 Important towers and 12 special towers to build, each with various attacks and utilities.

• KINGLY REWARDS AWAIT YOU IN QUESTS AND CHALLENGES! •
Join players from around the world in epic battles and huge challenges to stockpile treasures and rewards!

• UNIQUE VISUAL EXPERIENCE! •
A fantastic art style to feast your eyes on!